You are here: Home / About / Administration / Head of School 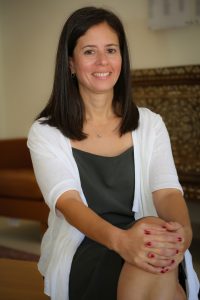 Julianne Puente stepped into the role of Albuquerque Academy’s seventh head of school on July 1, 2020.

Ms. Puente is a graduate of Hackley School in Tarrytown, N.Y.; Cornell University; and Columbia University. She worked at Hackley for 14 years in a variety of roles: kindergarten intern, history teacher, admissions, college counseling, dean, coach, and director of middle school life. In 2009, she was recruited as deputy headmaster and dean of students to help establish a new independent school, King’s Academy, in Madaba-Manja, Jordan, where she was involved in the design, construction, and implementation of most of the school’s programs, systems, and policies. She also played a large role in academic affairs, finance, curriculum design, development, alumni affairs, admissions, safety, operations, and the recruitment and evaluation of faculty.

“Ms. Puente spent more than a decade at King’s Academy, essentially building that school from the ground up,” says Board Chair Thomas Smidt. “She brings to Albuquerque Academy experience in nearly every facet of operating an independent school. In addition, her work at King’s Academy, which includes students from all over the world, has provided her with a broad knowledge of developing a healthy, connected, kind, and inclusive school culture.”

“I have been a fan of the Academy for more than a decade,” says Ms. Puente. “In the early days of creating and building King’s Academy, we developed a clear vision of who we wanted to be partly by reading about other schools whose approach to teaching and learning was in alignment with our own educational philosophy. Albuquerque Academy, from the beginning, was a school from which we learned.”