You are here: Home / About / Campus / Our Campus 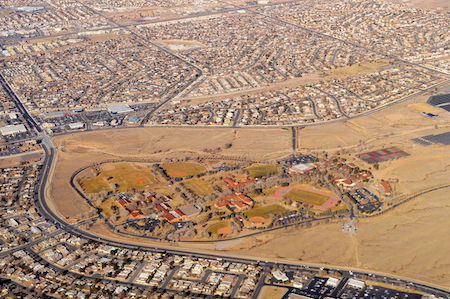 An Arroyo Runs Through It

Albuquerque Academy is located in northeast Albuquerque, a city with a metro area population of just over 845,900 bordered by the Sandia Indian Pueblo on the north, the Isleta Indian Pueblo on the south, the Sandia Mountains (elevation 10,678 feet) on the east, and the Rio Grande on the west. New Mexico’s multicultural population includes Native American, Hispanic, African-American, Asian, Anglo, and other groups. Albuquerque is home to The University of New Mexico, Sandia National Laboratories, Kirtland Air Force Base, and numerous high tech research and development companies. The area is known for its cultivation and support of the arts.

The Academy’s 312-acre main campus includes the West Campus (grades 6 and 7), and the East Campus (grades 8-12). The school’s required outdoor education program often takes place at the Academy’s 270-acre Bear Canyon property in the Sandia Mountains and at other sites throughout the state.

Albuquerque Academy is located at:

From Interstate 40
Take I-40 to exit 164, Wyoming Blvd. North. Stay on Wyoming Blvd. to 6400 Wyoming, approximately 4.5 miles. Turn right into the Academy campus at the light at Burlison.