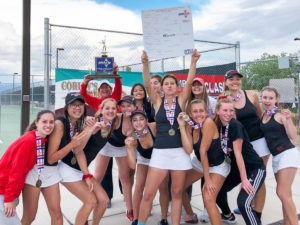 Albuquerque Academy garnered another national athletic honor, being named the top high school athletic program in the state of New Mexico since 2018 by MaxPreps.

Since 2017, the Academy has finished in the top 25 of the MaxPreps Cup national standings, a ranking system developed to determine the nation’s best overall high school sports programs. According to MaxPreps, varying point totals are awarded to teams that win a state title or finish in second place based on the type of sport, the size of the state, the type of enrollment division, and the number of teams participating in the enrollment division. Points are also awarded for teams that appear in national rankings for selected sports.

The Academy collected 16 state championships and 11 runner-up finishes since 2018, capping off a very strong decade of athletics for the school. During that timeframe, 35 Chargers have moved on to compete at the collegiate level. 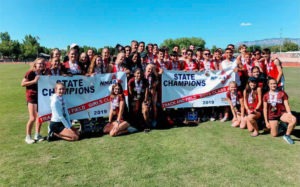 “It comes down to two things to be able to win as many state championships as we have,” says Albuquerque Academy Athletic Director Taryn Bachis. “One is to have longevity with coaches who are very knowledgeable and bring consistency to our programs. And two is to have the type of student-athletes we have at Albuquerque Academy. Our students are incredibly dedicated and hard working. When they believe in one another and their coaches, great things happen.”