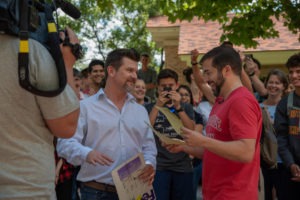 Math faculty member Jason Zuffranieri’s Jeopardy! streak came to an end Thursday, but not without securing multiple records in the Jeopardy! Hall of Fame. His total winnings of $532,496 place Mr. Zuffranieri in third all-time in total winnings, and his 19 wins places him in a tie for fourth place all-time games won.

Mr. Zuffranieri had been trying out for the show since his high school days. Starting in 2014, he applied online consistently and passed in 2017, but the waiting didn’t end there, as it was another two years in the contestant pool before being called up.

When Mr. Zuffranieri arrived in Los Angeles to film, things were hectic. A typical filming day started with a 7 a.m. call time, three hours of paperwork, going over rules, and buzzer practice before even knowing if you will be playing that day, he explains.

Shooting days are a marathon – Mr. Zuffranieri won his first five games in a single day.

For Mr. Zuffranieri, the attention his time on Jeopardy! has been drawing has been fun.

“It’s kind of cute. Students ask me ‘Are you that guy?’,” says Mr. Zuffranieri. “It just goes to show how much of a cultural institution this show is. Generations watch it. Everybody who’s been on the show is special. This is a special time for me.”

After his time on the show, Jason looks back with a grateful perspective.

“Nineteen wins was not something I would’ve ever expected! It’s funny how my perception changed as I went forward, from begging to just win one to expecting to ‘never’ lose,” Mr. Zuffranieri reflects.  “It was a kind of sad way to go down, but I had enough lucky wins along the way to make one mildly unlucky one a little softer to take. What an experience!”

Mr. Zuffranieri has taught mathematics at Albuquerque Academy since 2013. A puzzle and trivia fanatic, along with his extremely successful Jeopardy! run, Mr. Zuffranieri has also represented the United States in 10 World Sudoku Championships and is a two-time National Team Trivia champion.