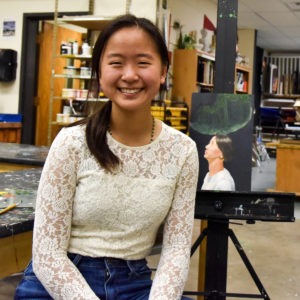 Academy Latin scholars earned recognition for their stellar performances on the National Latin Exam, including a perfect score by Carolyn Wang ’19 on the Level V/VI exam.

“A perfect score on any level of the NLE is rare,” says Latin teacher Hugh Himwich. “But a perfect score on the highest and most challenging level puts Carolyn in the company of the Immortals.”

Carolyn is also the chair of the Committee for the Classical Literacy Exam and the Classical Scholars Exam. These exams are taken by Latin students nationally and, to a limited extent, internationally. “Carolyn oversees all aspects of this scholarly enterprise that seeks to promote the study of classical civilization and its relevance in the modern world,” Mr. Himwich says.