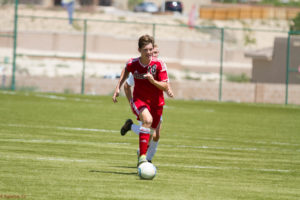 Albuquerque Academy student athlete Charles Touche was named the 2016-17 Gatorade New Mexico Boys Soccer Player of the Year on Monday, making him the second Academy male soccer player to be honored with the award and 16th in school history in all sports. The 6-foot-3-inch, 185-pound senior forward led the Chargers to a 19-3-1 record and the Class 5A state championship this past season. Charles scored 40 goals and had 15 assists, including a goal in Academy’s 2-0 win over St. Pius in the state final. The New Mexico High School Soccer Coaches Association’s Class 5A Player of the Year, he participated in the High School All-American Game in North Carolina in December and concluded his prep soccer career with 71 goals and 37 assists.

Charles has twice received a perfect score on the National Latin Exam and has maintained a weighted 4.38 GPA in the classroom and represents one of the state’s top academic candidates in meeting the Gatorade award’s broad criteria. He plans to attend Cornell University in the fall, where he will play soccer.

As a Gatorade Player of the Year, Charles will now select a national or local organization to receive a $1,000 grant as part of the Gatorade Play It Forward program.