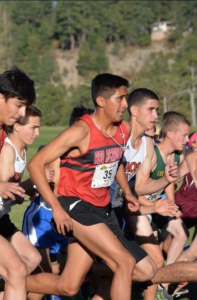 Albuquerque Academy student athlete Jordan Lesansee was named the 2016-17 Gatorade New Mexico Boys Cross Country Runner of the Year on Monday, making him the third Academy male cross country runner to be honored with the award and 15th in school history in all sports. The 5-foot-10-inch, 140-pound senior won the Class 5A state meet this past fall with a time of 15:29.15, finishing more than 25 seconds ahead of the runner-up and leading the Chargers to a first place finish as a team. Jordan also placed sixth at the Nike Cross Nationals Southwest Regional championships in Casa Grande, AZ and finished 45th at the Nike Cross National Final in Portland. Another highlight of his senior year was setting the fastest high school 5K time of the year in the state with a course record of 15:10.09 at the Albuquerque Academy Invitational.

Jordan also excels off the course. He is an A student and serves as a coordinator with Native Health Initiative, a community outreach group. Through NRI, Jordan ran an event in Jemez Springs called Running is Medicine which consisted of a 5K run and a children’s health fair.

Several colleges are recruiting Jordan as he is currently undecided on next year. Stanford, Princeton, Colorado State University, Air Force Academy, and University of New Mexico have all shown major interest in hopes of signing one of the best runners to come out of New Mexico.

As a Gatorade Player of the Year, Jordan will now select a national or local organization to receive a $1,000 grant as part of the Gatorade Play It Forward program.