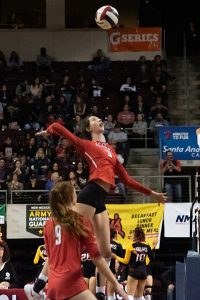 A third of this year’s Albuquerque Journal All-Metro volleyball team for the 2019 season wore the colors of the La Cueva Bears.

Four of the 12 players on the first and second teams are from La Cueva, which last month won its second consecutive Class 5A state title.

Topping this list are two New Mexico State-committed hitters, senior Mariana Sharp and junior Sidney McIntosh, who were as dynamic a pair of hitters as there were in New Mexico this year. Their kill totals back that up: McIntosh registered 323 kills, Sharp 311.

Those two, and Volcano Vista junior Olivia Andersh, are the first-team hitting trio.

They are joined on the first team by Albuquerque Academy middle Lauren Keller, setter Jade Martinez of Cibola (who averaged almost 10 assists per set), and Sandia Prep libero Kirschtin Kinberger, a junior who just completed her fourth varsity season for the Sundevils.