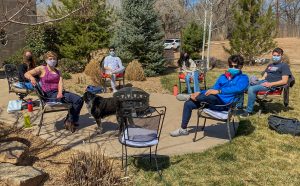 The Academy mock trial team finished its season in May in the #3 spot in the nation, going undefeated at the national competition, and Megan Blackwell ’21 was honored at a top-10 witness. The team, which competed against 46 teams from around the country and South Korea, includes:

This year’s competition was entirely virtual, and the team was not able to meet and work in person until April 1.

The case was released on April 1 to the entire country. “Between April 1 and May 14, the team developed directs, crosses, openings, and closings for both prosecution and defense,” says Coach Joaquin Sanchez. “They had to come to an understanding of what it all meant, what was important, and how to communicate it to others. The team had to take apart the 100-page case, break it down, distill it, find its ‘truth,’ and then rebuild it in the form of questions and answers.”

At the national competition, the Academy team faced New Hampshire, North Carolina, Idaho, and Washington. These teams finished 15th, 35th, 6th, and 9th, respectively. Each round at this level is closely matched, with just a few points separating the teams. Academy beat all four of them and finished the competition without a loss.

Due to the size of the national competition, there are always three undefeated teams. The Academy came close to qualifying for the final championship round (Iowa and eventual champ Maryland secured those spots) – just 14 points and/or one ballot away. The two finalists are determined by number of ballots won and then number of points scored.